Spread: what does it mean and how avoid spread

Home » Blog » Spread: what does it mean and how avoid spread

The difference between the buy and sell rates is known as a spread. Financial spreads occur in sectors such as the stocks, currencies, and other financial markets. A simple example of spread is the difference between the buy and sell price when going from one currency to another. For instance, to buy one Euro you may have to spend 1.16 USD but when you sell one euro you only get 1.10 USD. This means the spread is 0.06 USD, or 5.3%.

The mid-market FX rate in this case would be 1.13 USD; this is also called the "real" currency rate. While it is often expressed in percentages, the spread is still a part of financial accounting and costs of business. Your company can avoid absorbing those percentage costs via a virtual bank account such as B2B Pay.

Here you see a list of buy and sell prices against the Laotian KIP. For the US dollar the spread is 2.65%, for EUR it's only 2.2%, which a manageable about. But for the Korean won spread is 40% and the Philippine Peso tops it all with a whopping 47%! It's clear that your better off converting those pesos into dollars or euros while you're still in the Philippines. 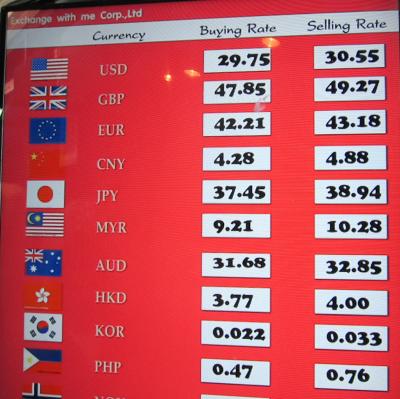 Here's the Python code used to calculate this:

When you change currencies, a low spread is ideal because it means that the difference between buy and sell price is low. If there is a big difference, it can be good to shop around or instead opt for taking money out of an ATM - if you know that your bank offers you a better rate (as would certainly be the case if you're holding Korean Wons inside Laos). Whereas if you're holding euro or dollar bills, it's probably cheaper to change your cash.

How does spread effect B2B exporters?

Small and medium sized B2B exporters usually don't have much negotiating power when it comes to a bank’s conversion rate. For example, when exporting from India to Europe the importer will in almost all cases go to their bank and initiate a payment. This usually has a fixed cost of around 30€. When asked, the local bank will claim there are no extra costs. But if you look further into this, you will see that the difference between the mid-market rate and the buy rate for Indian rupees is at least 3%, often as much as 6%.

These are costs the Indian exporter will bear, since invoices and contracts are almost always set in Euro or US dollars.

There are a lot of other ways for cheaper money transfer than a wire transfer with a bank, but this requires the importer to change their systems.

Liquidity And Its Effect On Spread

The liquidity of a currency pair is the most deciding factor when it comes to a currency pair’s spread. Liquidity in the currency market refers to the degree to which a currency can be quickly bought or sold in the market without affecting the currency’s current market price.

The four most liquid currency pairs, i.e. the ones that trade the most (ranked by daily traded volume) are the EUR/USD, USD/JPY, GBP/USD and USD/CHF. These four currency pairs are known as ‘the majors’.

The next most liquid pairs are the AUD/USD, USD/CAD and NZD/USD. They are often referred to as the ‘commodity currency pairs’ as these are currencies of commodity driven economies.

The above mentioned seven currency pairs constitute around 85% of daily trading volumes in the global currency market.

In the remaining 15% of daily traded volumes you find currencies such as the South African Rand (ZAR), the Mexican Peso (MXN), the Russian Ruble (RUB), the Swedish Krona (SEK) and the Norwegian Krone (NOK), and of course the Asian currencies such as the Chinese Yuan (CNY), the Hong Kong Dollar (KHD), the South Korean Won (KRW), the Singapore Dollar (SGD) and the Indian Rupee (INR).

As these currencies are substantially less liquid than ‘the majors’ and ‘the commodity currencies’ they tend to have much larger spreads, so it becomes more expensive to transact in them, especially if you are transacting in cross currency pairs.

Therefore, if you are operating transnationally as a business, within countries that possess an illiquid currency, it is vital for you to find an optimal payment solution that allows you to minimise costs of international money transfers.

If you want more information, leave your phone number and we'll contact you at your convenience.